Today, I am a conflicted contrarian. There is a lot of optimism around the stock market. Per the contrarian textbook (if there were such a thing), I should be reducing a lot of my equity allocation. But I’m not doing so in a significant way. Yet.

It’s always hard to pull the proverbial trigger and sell when everything looks fabulous. Conversely, it is scary to buy when everything looks bleak. It’s tough for me to sell equities when Gross Domestic Product (GDP) is poised to grow more than 10 percent this quarter. After this quarter, the slowdown in GDP growth looks to remain above trend instead of rolling over.

At one extreme, I am constantly running into new investors telling me about their latest and greatest investment. The high number of bulls is a sell signal. At the other extreme is another sell signal. Investors feel as if the good times will continue forever. That low level of bearishness makes me uncomfortable.

Nonetheless, I’m not ready to bail on stocks just yet. I’m holding steadfast because of the sentiment in the middle — those who are not bullish nor bearish, but instead are expecting a correction in the stock market.

According to the Investors Intelligence Advisors’ Sentiment (IIAS) survey, as of May 25, 2021, 31.7 percent of financial newsletter writers were expecting a correction (that number eased to 29.9 percent as of June 2, 2021). The percentage was just 19.6 percent in mid-April. According to IIAS, “these advisors are raising cash ‘just in case,’” and are “looking to buy on further weakness.”

Now, you may be thinking that publishers of financial newsletters are intelligent people, so we should pay attention to the preponderance of bulls. And, yeah, we should — except at extremes. They are subject to the same behavioral whims as the rest of the population. At least they offer actionable advice. In contrast, the CFA Institute (the organization which offers the Chartered Financial Analyst designation) recently informed us that their members believe a stock market correction is likely in the next one to three years. Well, that’s helpful.

I won’t get into the details of brain function here. But when it comes to the stock market, human beings are notoriously awful at timing the purchase and sales of investments. People like to buy stocks when the price goes higher and sell when it goes lower. It’s just the opposite of how we react to the cost of a can of tuna fish, a box of nails, furniture, or a car. It’s not necessarily a bad strategy unless you’re doing it just as the crowd is piling in or jumping out.

According to data from Bespoke, there have only been eight other times when that number exceeded 30 percent after being below it for a year. According to Bespoke’s graph below, the average 12-month return for the S&P 500 after those instances has been 10.45 percent.

It is notable that following two of those instances (2001 and 2007), the S&P 500 dropped precipitously. One of those years was the tech bubble collapse. The other was the financial crisis. Currently, there are some significant excesses in all sorts of valuation metrics out there. Still, I’d argue not to the extent or significance of those two years.

Also, institutional investors are raising cash. According to Fundstrat, as of May 19, 2021, institutional investors have raised $297 billion in cash through 2021. (A similar amount has been placed into money market funds by individual investors year-to-date.) That brings institutional cash levels to more than $3 trillion, nearly matching the peak levels reached during the worst of the pandemic. Supporting that data, the National Association of Active Investment Managers survey shows the most cautious positioning in the S&P 500 since April 2020. I suspect this crowded expectation of a correction will limit a pullback to the 5-10 percent range between now and the end of the year. I anticipate a pullback of that magnitude will trigger buying from professionals looking to get in.

I’ve primarily maintained my overall equity allocation. Still, I’ve been slowly shifting some of my stock holdings from Growth to Value. One of the investment holdings of my more aggressive portfolios did the same a couple of weeks ago.

I own the iShares Momentum Factor ETF (symbol: MTUM). The iShares website explains that the fund invests in “stocks exhibiting relatively higher momentum characteristics.” Or, in other words, it aims to buy high, sell higher. 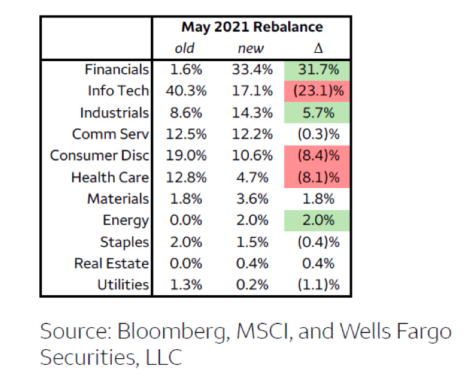 MTUM is a $16 billion ETF that rebalances semi-annually. The fund picks up some of the themes I’ve been tracking — a shift from the high-flying, stay-at-home stocks to the more Value-oriented “reopening” stocks. These reopening stocks reflect mobility in the U.S. economy as citizens receive their COVID-19 vaccinations and business restrictions loosen. This ETF isn’t about Value or Growth, underpriced or overpriced. It’s about momentum.

Although I’m not reducing my overall allocation, MTUM and I are making some changes to specific sectors.

Allen Harris is the owner of Berkshire Money Management in Dalton, Mass., managing investments of more than $500 million. Unless specifically identified as original research or data-gathering, some or all of the data cited is attributable to third-party sources. Unless stated otherwise, any mention of specific securities or investments is for illustrative purposes only. Adviser’s clients may or may not hold the securities discussed in their portfolios. Adviser makes no representations that any of the securities discussed have been or will be profitable. Full disclosures. Direct inquiries: [email protected] the meltdown in Bitcoin warning us to get out of the stock market?