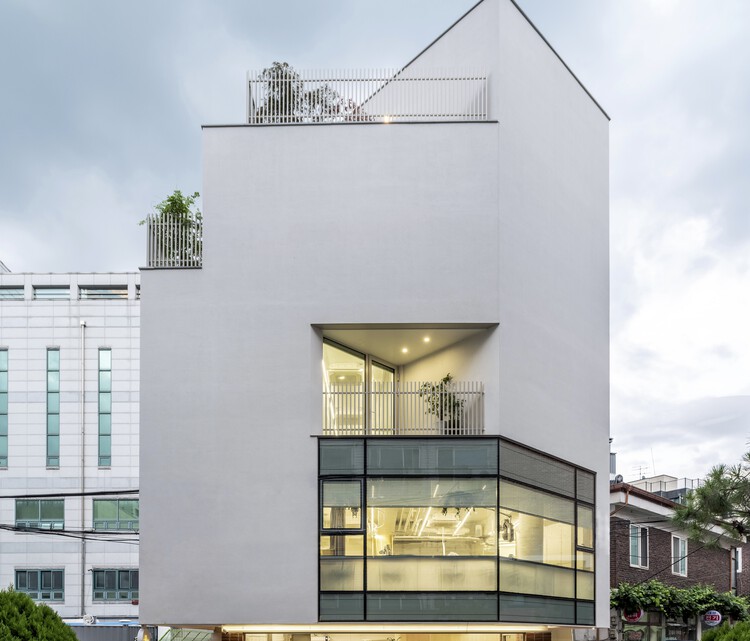 Land conditions. At the entrance of the tiny one-way street located just around the corner from Airport Road is the modest pentagonal lot. The five-sided piece of land has an unavoidable prerequisite, given the land’s corner location on narrow streets. The old building was built adjacent to the buildings surrounding it, and its appearance alone showed that it had been keeping watch over the neighborhood for a very long while. Walking around the site with the client on the first day and seeing the large windows of the apartment buildings surrounding the three sides of the site, we felt as if all the eyes were looking down on the land. One advantage of corner buildings is that many architectural elements can be displayed on the outside, with the downside of whatever going on inside the building being observable from the outside.

Client lifestyle. We had a long conversation about the client’s lifestyle and spatial preferences before commencing the project. The client mentioned that she prefers staying at home and taking a rest on her day off and enjoys drinking tea in the sun by a large window or having a relaxing time by herself in personal spaces. She hoped that the building would provide a sense of openness despite the small space, along with a large terrace and an attic for better use of space. After the conversation, it was decided that a warm, cozy space, instead of a fancy and crowded one, would suit the client better.

Design process. As with all commercial buildings, securing the area for the building that would translate directly to rent profit was most important. In order to secure the maximum area, we placed the building toward the streets not subject to slant line restrictions for daylight, and naturally, the building was designed to reveal the pentagonal shape of the site. The front of the building was partially retreated on the first floor to reveal parts of the crowded and bustling street, making it looks less congested and more expanded. For the first floor, floor-to-ceiling windows were installed in place of exterior walls except for the parts with structural pillars in order to maximize openness and naturally connect the line of sight from the alleys to the shop.

On the second floor, floor-to-ceiling front windows were placed at its corners to display the liveliness of the interior space in order to arouse curiosity from people passing by. Directly accessible from the streets, the yard of the building leads naturally to the second floor’s shop through the stairs. The small terrace on the third floor is designed to help blend the exterior scenery with the interior. The terrace, located along the front and side of the building, brings the warm sunlight from the south sky into the building and provides a place for a short rest. The most considered part of planning the upper floors was securing the privacy inside the building by diverting the eyes of the surrounding buildings to other places. The front of the site was not ideal for placing large windows without compromising the privacy of the building due to the surrounding apartment buildings. This surrounding context was naturally reflected in designing the facade of the building.

Instead of placing windows on the front, a wide terrace was designed on the side per the client’s request, and large windows facing the terrace helped give a sense of openness to the interior. The terrace had to be covered in some aspects to ensure privacy from the surrounding buildings. For this reason, a partially extended false wall and landscaping were added to block the view from outside, on top of a louver railing design along the long side to provide a sense of surrounding. The louver rail completely blocks the view from outside when seen from a certain angle, thereby securing privacy and selectively letting in light, to create a warm terrace environment. It also adds a little vitality to the facade of the otherwise calm, white building.

A lot of consideration was put into leveraging the relatively small area and its limitations in order to make the best use of the living space. Unlike most commercial buildings with the staircase and the living space clearly divided space-wise, this building uses part of its stair landing as the entrance to the living space to allow for more space. The entrance to the living space and the living room are naturally divided by the difference in the height of steps, eliminating the need for an actual compartmentalization and thereby maximizing the interior sense of openness. The bedroom and the living room are separated with a sliding door, allowing for a temporary extension of the living space when the bedroom is not used for sleeping and using the space used to capture a more diverse aspects of life. The facade of the pentagonal building is coloured in white, as if to represent a break from the crowded streets. We hope that the building may breathe life into the neighborhood while conveying the vitality of the alleys with its drawing paper-like appearance in contrast to the complexity of the surrounding area.