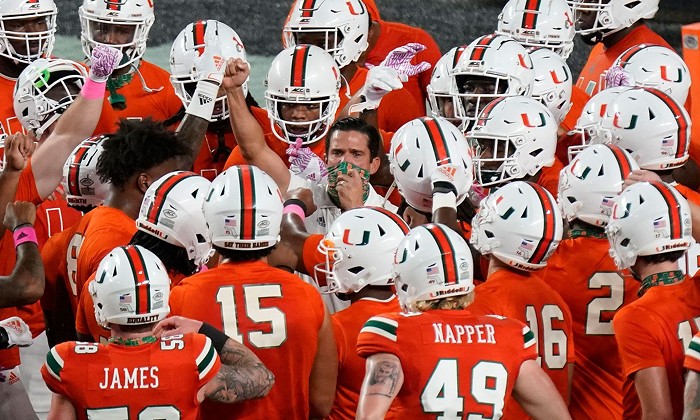 Let’s get these guys paid.

The organization that profits off the free labor of college athletes, the NCAA, finally got its comeuppance.

College athletes are free to profit from their celebrity and success.

It’s about time. After years of athletes playing for little more than their diplomas and some to-go boxes of cafeteria food, a recent U.S. Supreme Court decision changed the game: The NCAA can no longer prohibit college athletes from profiting from their name, image, and likeness. In layman’s terms, that means all those people behind the jerseys can now get paid.

Endorsement opportunities are already beginning to roll in for college athletes, and with the Miami Hurricanes season just a few weeks away, we decided to compile a list of some product/player matches we believe are meant to be.

Support the independent voice of Miami and
help keep the future of New Times free.

Here are ten partnerships deals we’re looking forward to seeing ASAP. Have your people call their people, then send us our three percent.
D’Eriq King for Burger King. A man with the last name King plays the most important position at UM. Do we need to spell this out for you, Burger King?

D’Eriq King could be playing in the NFL in a year. This is the fast-food juggernaut’s chance to get in on the ground level. If King is playing for the Carolina Panthers in a year, his rates will be much higher. Give this man a burger, at the very least.
Al Blades Jr. for Gillette. Imagine being a company that sells razors and not reaching out to a Miami Hurricanes player with the last name Blades. It’s tough to imagine such an oversight happening.


Not only does Al Blades Jr. have the coolest last name, but he comes from an NFL-famous family. That means instant credibility and name recognition. Gillette needs to send this man some Mach3s before Harry’s gets on it.
Te’Cory Couch for El Dorado Furniture. If you’re the owner of an El Dorado in Miami and don’t take advantage of a Canes player with the last name Couch, are you even serious about selling sofas? Don’t let City Furniture read this first!

Te’Cory Couch isn’t exactly a household name for Canes fans yet, but with a name like that, El Dorado needs to bet he knows his stuff.
Bubba Bolden for Bubba Gump Shrimp Co. Seriously? Do we even need to go over this? I’m just typing words at this point. Bubba Bolden is definitely playing on Sundays next year. Bubba Gump needs to up its game and call this man.

Can you imagine “The Bubba Bolden” fried shrimp platter tossed in bold Buffalo sauce? If this happens, I might cry.
Isaiah Cashwell for the Check Cashing Store. Nobody likes a check-cashing store. If you ever want a good cry, go spend 15 minutes in one of those places. No mask can stop you from inhaling the depression in the air. They badly need a spokesman.


I don’t know if Isaiah Cashwell is good at football, but with that name, the Check Cashing Store is losing money not hiring him.
Mike Harley for Harley-Davidson. Mike Harley is a speedy wide receiver. A motorcycle company sponsorship makes too much sense.


Sure, Harleys aren’t exactly known for speed, but if the brand wants to get in on the NCAA athlete sponsorship game, doing it with a University of Miami wide receiver by the same name seems like a no-brainer.
DJ Ivey for Sam Ash Music Stores. DJ Ivey is a name made for fame. It’s also a name obviously destined to be associated with music.

Sam Ash can now legally cut a check to a man named DJ who plays college football at a high-profile school. What is the company waiting for? DJ should be selling turntables on commercials that air on CBS Miami, like, tomorrow.
Sam Fishman for Bass Pro Shops. This man’s name is Fishman. You named your huge-ass stores after a fish, man. What are we doing here?

Bass Pro Shops needs to pay Sam Fishman to appear in a commercial where he is fly fishing in full uniform, helmet and all. Pretend you won’t remember that.
Charleston Rambo for Dwayne “The Rock” Johnson. One would think a last name like Rambo would get a guy a gun-store endorsement, but we’re guessing that might not go over so well for a collegiate athlete’s reputation. What makes much more sense is Rambo being brought in by Dwayne Johnson — a former Hurricanes player himself — as an assistant, or even just a pitchman for his brand of tequila, Teremana.

Rambo is a name fit for Hollywood. The Rock can likely help with that, all while giving back to his alma mater.
Louis Hedley for any and all Miami tattoo shops. The Miami Hurricanes’ punter is an absolute unit covered in ink art. It’s a miracle this man hasn’t already agreed to sponsored tattoos on his body. If you’re a tattoo shop in Miami, this is the Miami Hurricanes player whose DMs you need to be sliding into tonight.

If Louis Hedley appears on your television, you stop what you’re doing and pay attention. Who wouldn’t pay for that?