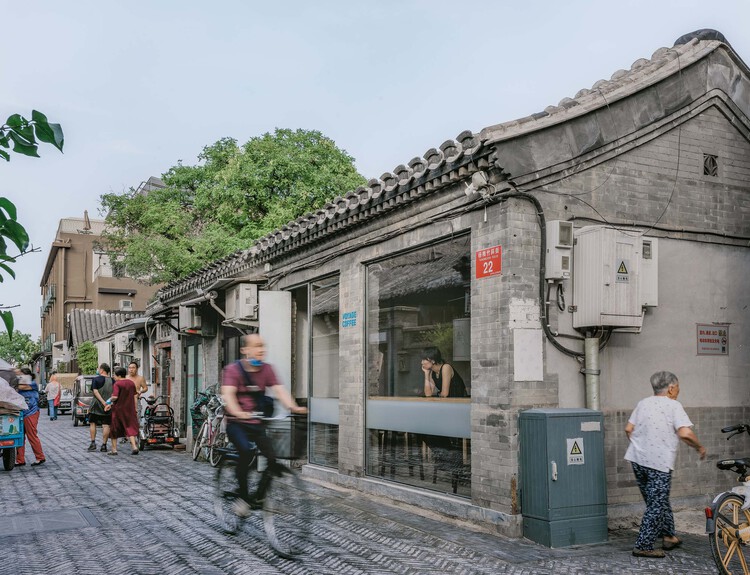 Text description provided by the architects. The project is located on Yangmeizhu Xiejie street in the west zone of the Qianmen area, Beijing. This slanting street connects Dashilar and Liulichang zone, and once gathered many bookstores and guild halls, it has a profound historical background and literary style. After nearly ten years of cultural preservation renovation, Yangmeizhu Xiejie street has been renovated and updated to fit modern daily life. And cultural space, constant renewal of small businesses, and local residences are mixed together.

Our site is surrounded by local residents as well, which occupied an area of 88 square meters. It sits in the south and with entry to the north, consisting of three independent buildings. The main house in the front is in a wooden structure with two-bay and 5-purlin beams, which remains the original ancient northern dwelling style. The back house and the side house are single-slope bungalows, which are newly built in the recent period. The three houses enclose an outdoor space of 24 square meters.

The front house occupies all of the elevations to the street, and the door is open on the facade. There is only a shallow brick eave above it with a traditional style called Ice-plate, and it faces the main street abruptly. We want to adjust the spatial sequence, so the 5-square-meter interior area has been”sacrificed” to the exterior. “So that a visitor can slip in without ceremony.” The narrow path at the entrance gives a feeling from high to low, from light to dark. Once in the garden, their eyesight suddenly becomes wider and brighter. The visitors enter the 3.8m-high main house after a body action of twist. After being received and served, they turn around again and walk through the indoor path. They come to the back room to sit and rest. Along the way, they could see the plants in the garden and enjoy the view through the transparent facade. After they take a seat, the space gives them the opportunity to look back to the path that they just go through and the busy street outside the cafe.

Because of the scale, the original outdoor space is actually more like a wider outdoor walkway instead of a decent courtyard. The design connects the interior and exterior through a loop. Now the courtyard is an important part of the entire spatial sequence, and the interface facing the inner courtyard can be opened freely. Visitors can sit under the eaves, under the low walls, or even on the floor by the corridor. The eyesight can be gathered and focused on the center of the garden, or it can float over the ridge to the ancient buildings in the distance. There is a water tap next to the plants in the garden for daily watering, and it is also convenient for visitors to wash their hands before tasting their coffee.